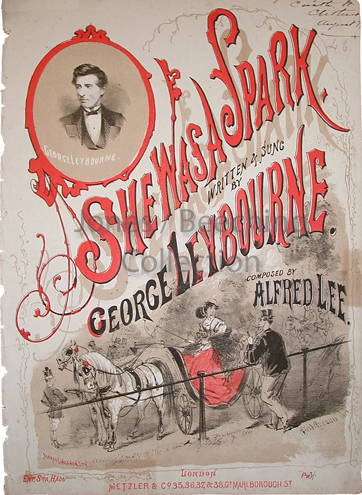 She Was A Spark

She Was A Spark – Leybourne’s first outing with Metzler & Co as publishers, did not last long in his repertoire, in fact there are no extant reviews for the number. Despite Concanen’s extravagant cover, by the end of March any adverts for the song had disappeared. From a modern perspective, and looking at the subject matter, it is not really surprising.

It is a tale of a money grabbing ‘swell’ marrying an heiress, only to find out on their honeymoon that her hair is a wig, she has a glass eye, and false teeth. Not only that:

To see her limbs come one by one, From off her graceful form... I’d only married half a wife, But her money keeps my warm.

It is a subject Leybourne would also touch upon later in his career in The Belle of the Ball, albeit with a lighter, more comedic touch. Another copy in the Jones / Beeching Collection has the red printing missing from the initial letter ‘S’, which is then printed in gold, changing the title somewhat.