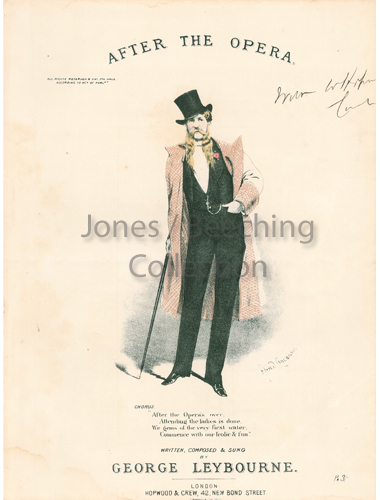 After The Opera – Concanen’s illustration shows Leybourne dressed as an upper class swell, one of the ‘Upper Ten Thousand.’ The beige wool overcoat has a fashionable quilted lining in pink silk and once again he wears the Piccadilly weepers and wig he first used when singing Champagne Charlie. The suave pose he adopts amplifies the sentiments expressed in the lyric, of a life of champagne drinking, cigar smoking, whilst living ‘in the Squares of Belgravia.’ With its bold waltz rhythm, it was a song which appealed greatly to his public, and on occasion the audience would demand he sing it more than once.

More details are given in The Heaviest of Swells Vol I.