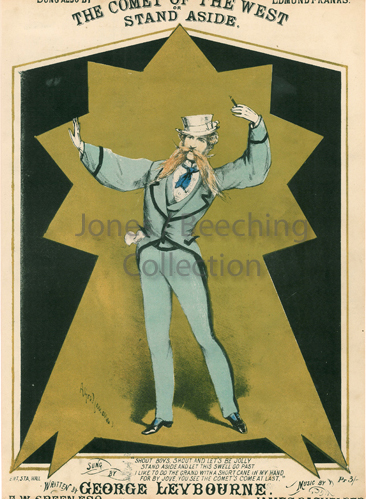 The Comet of the West

The Comet Of The West – In April 1867 astronomer Ernst Tempel detected a new comet, consequently named Tempel 1. At the time Leybourne was in Manchester having just met up with pianist James Batchelder, and, along with lyricist Frank W. Green, the discovery of the comet provided the perfect spring-board for their song. It is a triumph of style, from Leybourne’s costume with its elegant line as depicted in Concanen’s dramatic illustration, to the music’s high stepping rhythm, and the lyrics with their double meaning, moving as they do between the Comet sweeping through the heavens and Leybourne’s Swell sweeping through society venues.

More details are given in The Heaviest of Swells Vol I.